Posted by UNIBRAU / No comments 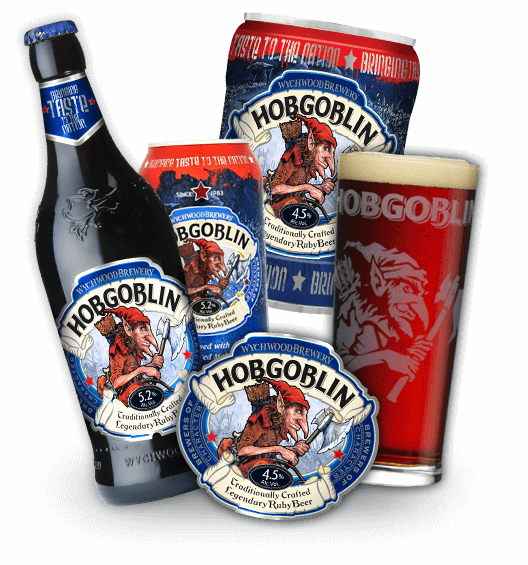 Hobgoblin is the best-known and most popular beer brewed at Wychwood Brewery and was created by Chris Moss. It is 5.2% abv in bottles and cans, 4.5% (previously 5.0%, and before that 5.6%, and originally 6.5%) on cask, and is described by Wychwood as a “Ruby beer”. Jeremy Moss, Wychwood’s head brewer, describes the drink as “full bodied and well balanced with a chocolate toffee malt flavour, moderate bitterness and a distinctive fruity character with a ruby red glow”. It was the first bottled beer in the UK to feature an illustrated label, as opposed to a simple text-based one, and it is currently the 5th best-selling bottled ale in the UK.

The current motto for Hobgoblin is “What’s the matter Lagerboy, afraid you might taste something?”, challenging drinkers of pale lager, a more popular style of beer in Britain, to consume a more prominently-flavoured drink. In October 2004 and 2005, Wychwood used a variation of this motto for Halloween, “Afraid of the dark, Lagerboy?”. In 2006 a complaint lodged by a lager drinker against Wychwood to the Advertising Standards Authority that the Halloween campaign was “aggressive” and “offensive” was not upheld.

During a meeting at the 2010 G-20 Toronto summit, Prime Minister David Cameron and President Barack Obama gave each other bottles of beer from their respective home towns/cities, with Cameron presenting Obama with twelve bottles of Hobgoblin, which is brewed in his Witney constituency.In return Obama gave David 24 bottles of Goose Island beer, from Goose Island Brewery. The President remarked that he would drink his beer chilled, as opposed to the optimal room temperature (15.5 °C/59.9 °F) at which strong ale should be drunk, prompting Wychwood to create a T-shirt in their online store reading “What’s the matter Obama, afraid you might taste something?”.